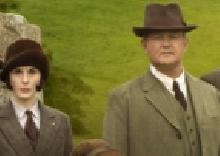 Actor Hugh Bonneville has dismissed plans for a Downton Abbey spin-off and hit out at the health and safety culture plaguing TV drama.

The ITV period drama bows out at the end of the next series despite attracting millions of viewers around the globe.

Its executive producer, Gareth Neame, has suggested that there could be a Downton film, while its creator Julian Fellowes has even mooted a TV spin-off, set in the 1970s.

But Bonneville, who plays the Earl of Grantham in the drama set on a fictional Yorkshire country estate, had a sarcastic response when asked about the possibility.

“Great idea. I think we should combine those two thoughts. Let’s make a film set in the 1970s in which Lord Grantham wears flares and a kipper tie. I can see it now,” he told the Radio Times.

He said that filming the final scenes would be emotional. “Series five was supposed to be the last so this one is a bonus and it feels right for the story,” he said.

“Of course it’s sad. We’re filming the final episodes now. When we finish there’ll be tears.”

Bonneville said that Downton Abbey, filmed at Highclere Castle in Berkshire, and other dramas had been beset by health and safety culture. “It happens on any film or TV set these days and it’s 10 times worse than it was 10 years ago,” he said.

The actor’s BBC-based comedy W1A – in which he plays the hapless broadcaster’s head of values – depicts a corporation obsessed with health and safety.

But asked whether health and safety culture had an impact on Downton, Bonneville said: “Oh sure. If someone is going to look into a mirror you need to fill out a long risk assessment form about possible damage to their irises.

“I’m exaggerating of course, but that is what (W1A’s creator) John Morton has tapped into, the spread of a risk-averse culture and the way we’ve adopted all these acronyms, targets, hurdles, barriers and red tape rather than just getting on with the job of making programmes.”

The Covid-19 (Coronavirus) outbreak is meaning that many of us are required to work from home and will be required to do so for quite some time. This …Read more